Welcome to the The MG Owners Club x

Ian and Yvonne are having another busy MG year. If you’re new to classic car ownership – please chat with them, they really know how to get the best out of their MG.

They took part in the Coast to Coast Run. Starting from the Art Deco Midland Hotel in Morecambe Bay to the Grand Hotel in Seaburn, Sunderland. The run from MK to Morecambe is 174 miles, avoiding motorways, so they broke up the journey in Chorley, then arrived in plenty of time for the banquet in the evening, where they met friends from Torquay.
They drove 650 miles in total, but enjoyed it so much they have already booked for next years event, which finishes in Scarborough. The route sounds fabulous. Please check out the full report on the club website.

They also attended a charity car show in Cirencester in aid of Cirencester Housing For Young People, apparently a good event, a nice day out and a good cause.

Chiv, has been in touch to let us know he has bought an MG BGT which looks really great! Apparently, it has done very few miles since a full restoration and just needs some recommissioning to get it fully back on the road.
Hopefully we’ll see it at a club night soon.

Having seen Stonor Park on the Antiques Roadshow, Jenny and I went across to the Bucks/Ox borders for the day. Malcolm and Janet came along in their Morris Minor. It was a great place to visit and a fab drive avoiding A roads.

Yvonne & Ian did a charity car show in Cirencester main square, this was in aid of Cirencester Housing For Young People (CHYP), a small charity that provides support for vulnerable young people.

The day had a good variety of vehicles and a good little band to boot.

We left home at about 6pm and went to friends in North Cerney just out side of Cirencester using our favourite route of Ayno, Deddington, Chipping Norton, Burford and Bibury, arriving at 7;40pm.

Another good event and a nice day out. 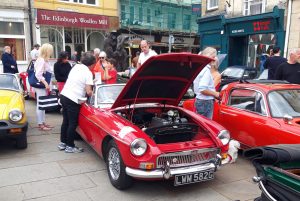 Starting in Morecambe on Friday 15th July 2022 with a banquet and setting off on Saturday 16th July 2022 from the Midland Hotel, Morecambe the run crosses the Forest of Bowland, Yorkshire Dales and the North York Moors ending in Scarborough with gala banquet at the Crown Spa Hotel.

Full details and prices negotiated with the hotels and pubs (tea and lunch stops are arranged) this will be the fourth coast to coast run organised my myself and is a re-run of the 2018 run.

See http://www.frenchblat.com/c2c.htm for further details and how to register.

Yvonne and Ian attended the run from the newly refurbished Art Deco Midland Hotel in Morecambe Bay to the Grand Hotel in Seaburn, Sunderland, an event that had originally been planned for 2020 with numerous start dates suggested as the Covid crisis changed.

Martin & Jackie and Geoff & Liz, had also planned to join the event but their circumstances changed and they could not attend. We were surprised that friends from Torquey who we know from previous runs, were on the run and placed on our table for the first night.

The run from MK to Morecambe is around 174 miles using no motorways, so we decided to start on Thursday 29th and break the journey at Chorley, in Lancs then next morning complete the last few miles refreshed and arrive by mid-day on the Friday ready for the banquet in the evening.

The route was A5, A50, A51 then A6, this went well with the car only suffering brake squeal (which is another story). The Midland Hotel has featured in the TV programmes the Bay and Hercule Poirot, food service and sea view room was fantastic.

The run on Saturday morning started and stopped within a few metres for a photo shoot at the foot of the Eric Morecombe statue, it then went through the Lake District and Hawkes Head, Windermere and Ambleside to Kirkstone Pass Inn for coffee at 1,481 ft above sea level.

Then on via the A592 through Glenridding, Ullswater, Watermillock to Alston for lunch at the Cumberland Inn. After lunch we follow the A689 SP Durham using the winding and undulating roads we enter County Durham. The views and road were great and something we all should try and do at least once.

After 154 miles we arrived via Sunderland at the Grand in Seaburn for a well-earned G&T and chat with our colleagues and evening meal.

Sunday was a later start to the Beamish Living Museum, a real look back into history, Yvonne made me walk miles and I was glad to get back to the hotel for a rest.

Monday morning we left for home and used the A19, A1 and finally M1 to Ashby- de-la Zouch to see family, then via the A44 to the A5 home and our first real rain as we headed through to Towcester.

The trip was a mere 650 miles and it cannot be bad as we have already booked for next year which finishes in Scarborough, the information on this will be circulated and I will include on the web site

In July Ian & Yvonne did the Cotswold Caper a run we and others in the club usually do, it’s a great run and varies every year.

This year Martin & Jackie and Dave & Sue could not make the run, which was a shame also the numbers were down as people decided their options.

The run was great and started from Cheltenham Rugby club and did a very scenic route which incorporated Bibury near Cirencester and finished at the same place.

We left and travelled to our sons in Chippenham Wiltshire in time for the England match and evening meal, travelling home on the Monday. 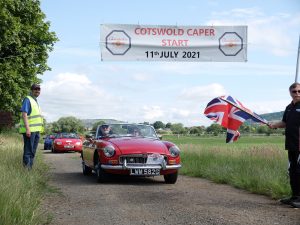 Chiv, has been in touch and apologises for not attending recently, as a coach driver he has been working long hours from 05;45 until 19;00, so time is limited.

He has though bought a new car a BGT which looks really great, it has had a full restoration then parked in a garage until Chiv set it free. It as running a little rough but is having the carbs looked at very soon.

This is a bit different from his TF.

I have attached his new B for you information, cannot wait to see it and him on a run. 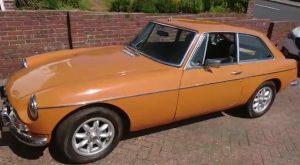 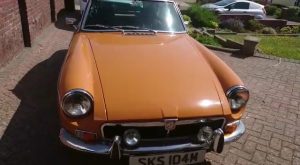 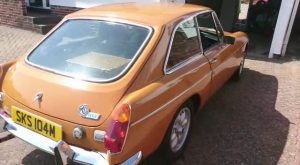 Our August Club Night was the first “normal” meeting for 18 months – what a relief that things seem to be returning to normal…..long may it continue!

As usual, August was a quiet night, with people being on holiday (or perhaps staying at home to watch the synchronised swimming at the Olympics?)

We’ve managed to have completed a couple of events since the change to “lockdown” rules. A great run for lunch at the Wheatsheaf at Graffham Water. We also had a sunny run to Broughton Castle with lunch at the Saye and Sele Arms.

Ian and Yvonne have managed to attend the Cotswold Caper, Coast to Coast and have a further event at Cirencester booked. Very impressive!

We had three new prospective members attend, all with their MGs. Welcome to Steve, Pete and Alan. We look forward to seeing you at future Club Nights and events. We have also been contacted by Remy who is hoping to come to our September meeting.

We haven’t managed to have an AGM for 20 months. We really need to have a mini AGM at the next Club Night to:

– discuss club finances. (We still have ongoing costs but have had no income from subs)

Dave and Sue have suggested we have some midweek events for those who are retired. Seems a good idea.

13th to 15th Combined Triumph and MG Weekend at Malvern

15th Anyone interested in a run to Stonor Park (Ox/Bucks borders)? Please let us know asap

1st Club Night at the Inn on the Lake

6th Club Night at the Inn on the Lake

3rd Club Night at the Inn on the Lake

12th to 14th Classic Car Show at the NEC

Enjoying MG:
We managed to have another event in July, with a group of us heading across
country to at the Saye and Sele Arms for lunch and then to Broughton Castle.
It was a delightful drive (borrowing from an MK Classic Tour route from
2016). We managed to avoid all A roads – marvellous. The event was arranged
at short notice and worked really well.  So, if you fancy a day out with like
minded people – why not e mail us and we’ll let everyone know.
Events have started to get underway across the country.

Ian and Yvonne have taken part in the Cotswold Caper, which they described as excellent.

As I write this, they are up north, taking part in the Coast to Coast run. They
should be able to give an update on Wednesday. If you are planning to attend
some events this year, do let us know.
Club night in July was well attended, with the car park a great advert for
classic car ownership.
I’m writing this at the end of July, just 5 days before our August Club
Night. I’m hoping we have another good turnout, so we can try and get a few
more events in the diary before the end of the summer. We do need to have an
AGM soon, to get an events plan together, agree the finances and make sure
everyone is happy with the direction the club is taking

Enjoying MG:
It was marvellous to see so many of you at our June Club Night at the Inn on
the Lake – and to see so many MGs in the car park too. I think we all
appreciated the chance to catch up with friends and not have to worry about
‘bubbles’. I know that some of you have had a tough time over lockdown,
hopefully we can all start to look forward to better days.
So, not only did we have a club night but we even had an event! We had a
fantastic turnout for our run up to the Wheatsheaf at Perry, near Graffham
Water, with 21 people and eleven cars joining. The pub did a great job,
making us welcome and feeding us well. Thanks to Mike for letting us use part
of his MKCT route.
Classic events are starting to be held around the country. I went to the Peak
District and visited a new car museum called The Great British Car Journey,
which features over 100 British classic cars from an Austin 7 all the way up
to the latest McLaren. It also features ‘Drive Dads Car’. It was great
fun, I recommend it.
I also went to watch historic motor racing at Donnington, the first for a
year. It was a great day out watching large grids of fantastic cars.
I know some of you are starting to plan to attend some events this year. How
about the combined MG and Triumph day at Telford on August 22nd, Goodwood FoS
in July, Silverstone Classic in July,  Goodwood Revival in September or the
Classic Motor Show at the NEC in November.
Please bring along and share any ideas you have for events this year –
we’ve got some catching up to do. Cheers.

It’s the 30th May and the sun is actually shining!
It’s been such a dismal month so far. However, the glorious weather is
forecast to last the rest of the week, so our June 2nd Club Night should be
fun. Hopefully you’ve all had a chance to get your cars serviced and
polished, so we should have a good turn out. Please bring along and share any
ideas you have for events this year – we’ve got some catching up to do.
I’m delighted to have had my second vaccination and I expect most of you
have too – such good news. Look after yourselves  and see you at a club
night soon.